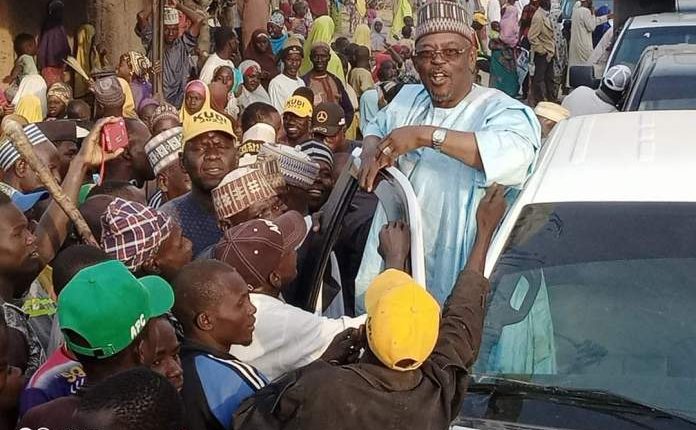 The Member welcomed the decamped members to APC during his campaign rally on Sunday in Kazurawa and Balan towns of his constituency.

At the occasion, former member of NNPP in Kazurawa Dalha, Alhaji Sule Mai Rakumi declared that he joined APC for the interest of development in his political ward and the honour he received from the Member House Of Representative of his constituency which he termed as respect to his personality as an opposition leader in Kazurawa Ward. He confirmed that Hon. Mahmud asked him to come and work together to bring more development to his hometown.

Also in Kazurawa, Malam Adamu Nakaka who had donated his personal property to NNPP headquarters revoked the donation and sacrificed it to APC for another party office to be opened in his hometown. “APC is where I belong before I cross carpet to NNPP for political reasons, and now I came back to my party in order to make it great again as we are all aware of the dividends of Democracy the party is given to the people of Gaya Local Government,” Nakaka said

Proceeding to Balan Town, APC did not only receive the decamped members of NNPP only, but the members made sure the Red Caps they wore were been burnt to assure the APC of their support and loyalty to the party in the forthcoming election.

Alhaji Ibrahim Fidda-Lami who spoke on behalf of the entire 150 decamped members of NNPP for APC said his group decided to discard the ideology of his former party for APC because they foresee no light of victory in the party. He further assured the member Gaya, Ajingi and Albasu Constituency that APC is getting full control of Balan Ward.

In his remark Hon. Abdullahi Mahmud Gaya appreciated his constituents for their day and night massive support and encouragement he received from them.

He vowed to continue protecting the interest of his constituents in the green chamber and lifting the less privileged in the communities he is representing by empowering them with skills and tokens for business startups, especially women.

He enjoined the electorates to pray for APC’s victory in the forthcoming election and also charged them to pray for whoever they would have voted, to put priority on their activities as they possessed the power of popular sovereignty.

The campaign rally took off from Tani and Maza-Goma, towns where the member paid a condolence visit and prayed for the deceased.

Among the towns visited, were Alkalawa, Jibawa, Matsawar, and Kalahandi, all in Kazurawa Ward and later proceeded to Ni’ima Ward and ended the campaign rally in Balan Ward.