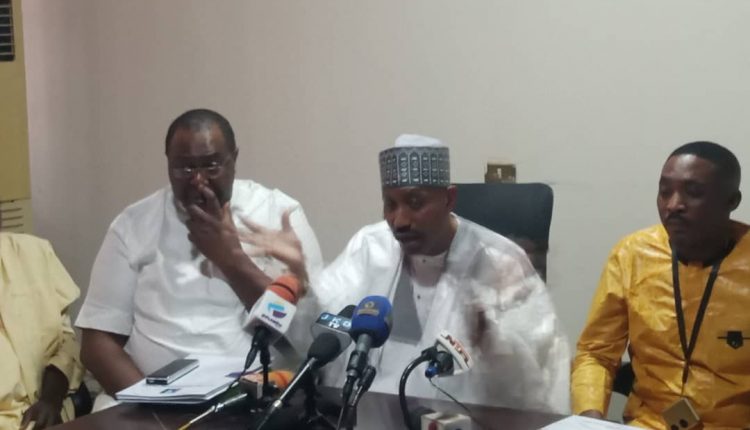 While assuring that if voted into power in March this year, he would restore Kaduna State’s glory as the pride of the North, ADP Gubernatorial candidate,  Sani Shaaban has in strong terms, condemned the Muslim-Muslim ticket adopted by the rulingc All Progressives Congress (APC) in the state and at the national level.

The ADP gubernatorial candidate  expressed this, while interacting with journalists in Kaduna on Friday January 13.

“With the Muslim-Muslim ticket, they only succeeded in putting fire on our heads. Our brothers from the Southern Part no longer feel comfortable with us,” he said.

According to him, the Muslim-Muslim ticket in Kaduna today is nothing but a disguise.

“I want someone to come and tell me what are the benefits of the Muslim-Muslim ticket.

“It is a great challenge for me to tackle this religious imbalance in Kaduna State,” he said.

Shaaban said that when there is suspicion and  lack of confidence the society cannot develop as expected.

Speaking further, he vowed that if given the mandate at the polls by Kaduna residents, he would restore the state’s lost glory.

“I want to bring back the glory of Kaduna. I am what I am today because of God.

“I would do the best I can to ensure Kaduna State becomes the envy of all. Kaduna is not a poor state. If there is any state that is strategically located on the planet, Kaduna is the one.

“Kaduna used to be number one in textile industry, but today the case is different. The tomatoes we have, the ginger, the pepper the grains we have, yet people are hungry,” he lamented.

He was optimistic that Kaduna state can sustain itself.

“We don’t need to fall back on national grants, Kaduna State is strategic and has all it takes to stand on its own,” he declared.

The gubernatorial candidate expressed dismay over the debt profile of the state.

“If you talk of debts, today after Lagos, Kaduna State is the most indebted in Nigeria.

“I have the will and I believe God is always with the righteous. He will not forget Shaaban and I will turn around the fortunes of the state for good

“The way they say it is indebted, that it is only a fool that would want to take over from this present government, I can weather the storm,” he declared

According to him, he was opportuned to be in major strategic cities in the world.

“I see what they do and how they do it. There are lots of African countries today, they are what they are because of my contributions. I want to replicate same here.

“We are not coming on board for the glory of the siren. We want to give back to the society the knowledge God has given us. Two years after Sani Shaaban in Kaduna, other states will start copying us, if possible I would be a governor of more than one state,” he said.

He challenged the media to play it’s constitutional role of watchdog of the society by putting policy makers and public servants on their toes.

“I want to send some words of caution to my good friends in the media. You saw what transpired from 2015 to date nationally and in Kaduna. What roles did you play in the laws brought in. Or are you being paid?” He queried.

Continuing he said, “Some  of us know some students in the Kaduna State University (KASU) who were thinking of graduating in their 400 level but sent back to square one because of the school fees increase. I have met some of those students, riding Keke NAPEP. Please be part of this stream, check out the situation and have love in your hearts,” he charged.

He further criticised the role the media played by not making some issues public discourse.

“Can you remember the case of those kidnapped at Forestry College in Mando, where were you? Can you remember those that were  kidnapped, the train victims. A lot of things have gone wrong in my state as if the state is locked in a box,” he lamented.

“This  is a state one Lebanese collected mobilisation fee and disappeared. I was hoping the issue would be dug into, but I am surprised it just died,” he submitted.