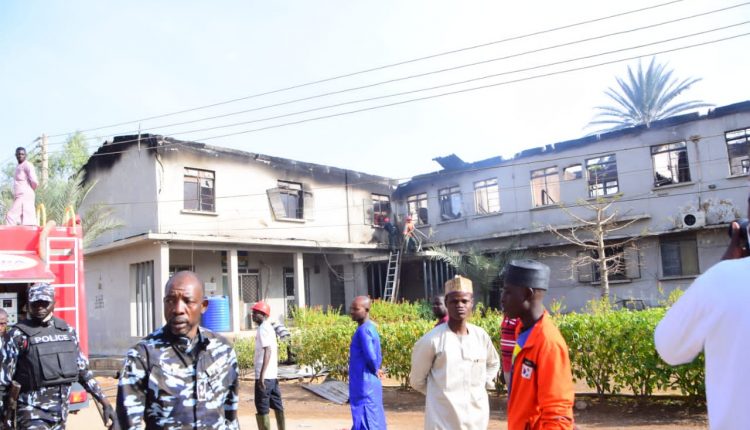 Kano State Governor, Abdullahi Umar Ganduje has commisserated with the Inspector General of Police, Alkali Usman Baba over the fire Incident that gutted many offices at the State Police Command Headquarters on Saturday.

The Governor represented by his deputy and APC Gubernatorial Candidate, Dr.Nasiru Yusuf Gawuna who visited the Police Headquarters in Bompai Area to inspect the damage by the inferno expressed his sadness over the occurrence of the incident describing it as an act of God.

“We were shocked when we received the sad news of the fire disaster,therefore we are here to commisserate with you on behalf of the Government and People of Kano State”.

“We are calling that preventive measures should be put in place to prevent feature occurrence of the incident”.

The Governor however prayed that the incident will never occur again,assures of support and also appreciates the efforts of the Fire Service for putting out the fire.

Speaking earlier the State Commissioner of Police Alh.Mamman Dauda said he was in the office when the fire out break started.

“We are investigating the cause of the fire incident”.

“There was no loss of life”.

He thanked the Governor for the visit which he said demonstrates the concern of the State Government.