... Says Security Operatives Closing On them

The instigators of the mayhem that engulfed Gautg and KwaZulu-Natal will not be allowed to ignite anarchy and spread instability, says President Cyril Ramaphosa.

The President said this during an oversight visit to eThekwini, in KwaZulu-Natal, during which he assessed the impact of recent public violence and the deployment of security forces.

The two provinces – which are two of the country’s leading economic hubs – sustained tens of billions of rand in losses when businesses were looted and destroyed during sustained public violence. Over 117 people have died during the unrest while over 1400 have been arrested.

The President earlier this week deployed soldiers to assist police and metro police as they restored law and order.

During his visit on Friday, President Ramaphosa was accompanied by Police Minister Bheki Cele, his State Security and Defence counterparts Ayanda Dlodlo and Nosiziwe Mapisa-Nqakula, as well as KZN Premier Sihle Zikalala and members of his executive.

The Ministers, Premier and MECs have been on the ground in a bid to quell tensions. 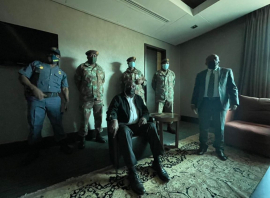 The President said they were dealing with a very difficult situation and that he has been in constant contact with Zikalala, the Ministers, as well as the Commander to get all the updates.

“Obviously, as a government, we are extremely, extremely concerned about what happened here and we are doing everything to deal with it.”

He said it was abundantly clear that the unrest and looting was instigated.

“There were people who planned this and coordinated it. Our intelligence services and our police have now got a line of sight of what actually was happening here. We are after those people, we are going after them.”

Security officials have identified 12 suspects behind the alleged insurrection.

President Ramaphosa said the instigators intended to spread instability in the country.

“We will not allow anarchy and mayhem to just unfold in our country. It is most unfortunate that so much damage has been done to the country and people have lost their lives – that is the most concerning issue,” he said.

In the seven days of the unrest, 95 people lost their lives. Beyond this, billions of rands of damage was inflicted on the KZN economy when businesses and infrastructure were looted and razed in fires.

“People are now going to go forward having lost jobs and the economic damage that has been done,” he said.

The country’s image as an economic destination had been severely dented, not just to local investors but also to external investors. “We’ve really been taken backwards on our path to economic recovery.”

The President conceded that government could have done better in managing its response to the protests.

“Primary in the minds of the Minister of Police and commanders was to save lives, to make sure that we did not get into a situation which could have resulted in more mayhem,” he said.

Government will re-examine what the country needs to do to protect its citizenry.

While applauding certain communities for taking it upon themselves to defend themselves and their assets, President Ramaphosa said it was unfortunate that some had gone beyond the parameters of the law.

“We welcome the fact that ordinary citizens are working together with the security forces, standing up not only to defend their own assets, but also defending our democracy because they can see that this is an assault,” he said.